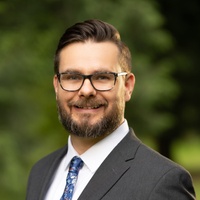 Logan joined the Bridgetown Wealth Management team as a financial advisor in 2022, but has
been part of the family for more than a decade–as a commercial client. In his previous career as
controller for a Northwest energy recycling company, Logan oversaw finance and accounting,
including administration of the company’s 401(k) program–managed by Bridgetown Wealth
Management. It was during his meetings with Phil that Logan started thinking of his next career.

“After 11 years of working in the back office, I realized how much I missed the human element.
What I enjoyed most about my then-job was conversations with co-workers–I was a source of
information for fellow employees about their taxes and the state of the economy. Phil was our
company’s financial advisor, we had a good relationship, and one day I asked him, ‘how can I
do what you’re doing?’ Fast forward a few years, and I’m officially part of the team. I love the
personal interaction with clients, listening, asking questions and knowing that they know I hear
what they want to accomplish.”

Logan grew up in Big Bear Lake, CA and followed his family to Oregon in the early 2000s. He’s
at home now in Portland. Logan is a graduate of Portland State University’s Business Honors
program, a member of Rotary Club of Portland (on their Investment and Homeless Services
Committees), and finds balance in mountain biking, concerts, culture and soon, paragliding.